Like a scene from a James Bond or Mission Impossible movie, a new offensive USB cable plugged into a computer could allow attackers to execute commands over WiFi as if they were using the computer’s keyboard.

When plugged into a Linux, Mac, or Windows computer, this cable is detected by the operating system as a HID or human interface device. As HID devices are considered input devices by an operating system, they can be used to input commands as if they are being typed on a keyboard.

Created by security researcher Mike Grover, who goes by the alias _MG_, the cable includes an integrated WiFi PCB that was created by the researcher. This WiFi chip allows an attacker to connect to the cable remotely to execute command on the computer or manipulate the mouse cursor.

In a video demonstration by Grover, you can see how the researcher simply plugs a cable into the a PC and is able to connect to it remotely to issue commands through an app on his mobile phone. 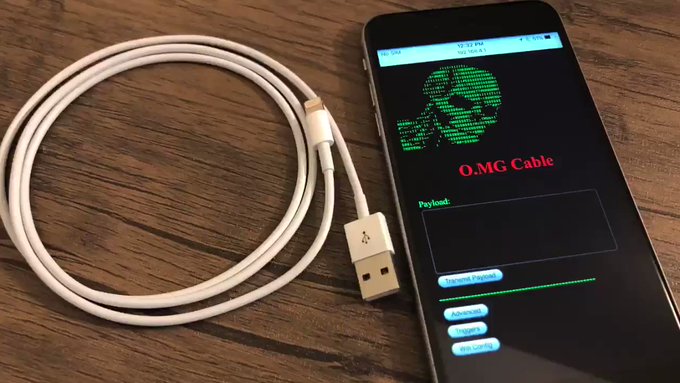 This was a fun way to pick up a bunch of new skills.

In an interview with BleepingComputer, Grover explained that when plugged in, the cable is seen as a keyboard and a mouse. This means an attacker can input commands regardless of whether the device is locked or not. Even scarier, if the computer normally locks a session using an inactivity timer, the cable can be configured to simulate user interaction to prevent this.

“It “works” just like any keyboard and mouse would at a lock screen, which means you can type and move the mouse,” Grover told BleepingComputer. “Therefore, if you get access to the password you can unlock the device. Also, if the target relies on an inactivity timer to auto lock the machine, then it’s easy to use this cable to keep the lock from initiating by simulating user activity that the user would not notice otherwise (tiny mouse movements, etc).”

Grover further told BleepingComputer that these WiFi chips can be preconfigured to connect to a WiFi network and potentially open reverse shells to a remote computer. This could allow attackers in remote locations to execute commands to grant further visibility to the computer when not in the vicinity of the cable.

The app that issues commands to the O·MG cable is being developed collaboratively according to blog post by Grover. The developers hope to port the ESPloitV2 tool for use in the cable.

While the HID attack can be prevented using a USB condom, which prevents data transmission between the cable and the computer, Grover told BleepingComputer that it could still be used for WiFi deauthentication attacks.

WiFi deauth attacks are used to disconnect nearby wireless devices from an access point by sending deauthentication frames from spoofed MAC addresses.

Grover envisions that a deauth attack can be used in scenarios where the attacker does not have access to a location to perform an attack, but the victim’s plugged in cable does. This could allow a remote attacker to create a physical diversion while allowing another remote attack that may have been noticed to slip by.

As an example, Grover illustrated the following scenario.

“You aren’t in range of a wireless target, but the target person is. Using this cable, you can get them to carry the attack hardware inside a controlled area. Maybe to disrupt a camera? Maybe a fun disruption/diversion for another attack. (Imagine distributing a dozen inside an office and suddenly IT/Sec is focused on the chaos).”

Researcher hopes to sell the cable

This cable is not currently for sale, but Grover hopes to sell it to other security researchers in the future.

Grover told BleepingComputer that he has spent approximately $4,000 over 300 hours of research into creating the needed WiFi PCBs and adding them to the cable. This was done using a desktop mill, which is typically not used to create high quality PCBs in a DIY environment.

Due to this, many users were surprised by the quality of Grover’s chips and Bantam, the manufacturer of the mill, reached out to learn how the researcher was able to do it.

Before selling the cables, the researcher still wants to make more changes before sending it off for production.